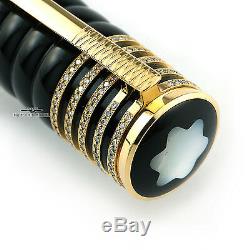 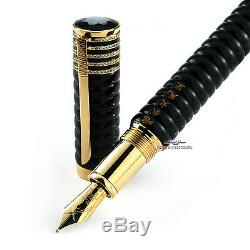 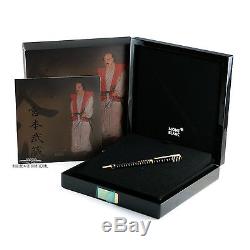 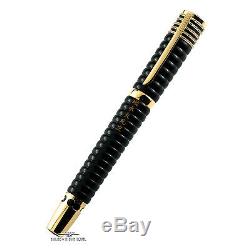 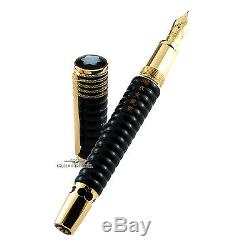 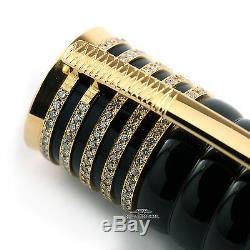 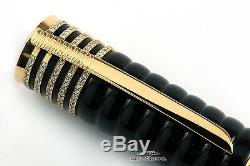 Montblanc Miyamoto Musashi Limited Edition of 77 Fountain Pen. Miyamoto Musashi was born in the Japanese province of Mimasaka in 1584. Even to the present day, he is regarded as the greatest Samurai warrior of all time. He defeated his first opponent at the age of 13 and set off just three years later to perfect his skills in martial arts.

In the year 1600, Miyamoto Musashi took part in the legendary Battle of Sekigahara, and dueled with more than 60 opponents over the course of the succeeding years without loosing a single fight. It was during this period that he perfected his fencing technique known as Ni-Ten Ichi Ryu. In duels he wielded his Katana with a single hand and also made use of his short sword, which was normal only used as a spare or for ritual purposes.

For Musashi the way of the sword was just one of the skills a samurai had to master. He believed art, craft, martial arts, and philosophy formed an inseparable unity in the life of this noble military caste in Japan. It is because of this belief that Musashi became a passionate and dedicated artist. Even now, his calligraphy, Zen paintings, and sculptures are considered as masterful as his innovative swordsmanship.

As a samurai warrior, Musashi was bound by Bushido, the honorary code of the Japanese Military Nobility. This included virtures of sincerity, courage, goodness, politeness, honesty, honor, and loyalty. Miyamoto Musashi divided his "Go Rin No Sho" into five chapters based on the five elements in Buddhism. The introduction chapter, "Book of Earth" explains the path of a warrior in metaphorical terms. The "Book of Water" deals with spiritual and anatomical theories as well as kendo fighting techniques.

In the "Book of Fire" Muashi teaches the principal of judging the overall situation in a duel by observing the individual aspects. A comparison of Musashi's Ni-Ten Ichi Ryu with other combat techniques in the "Book of Wind" cautions us not simply to insist on our point of view but to learn to understand other people's opinions.

The last Chapter of the "Go Rin No Sho" is the "Book of Emptiness". The chapter describes the indomitable spirit of a perfect martial artist. Unshakable inner strength, upheld by wisdom and openness, coupled with intelligent strategic action - this philosophy counts as an ethical guide for people all over the world and still has a firm place in today's management strategy.

Montblanc pays tribute to Miyamoto Musashi with this unique limited edition. This magnificent creation is limited to 77 which commemorates the seven virtues of the Samurai.

The golden barrel of the Montblanc Miyamoto Musashi is topped with a noble jet black lacquer. It's cap is decorated with five diamond-encrusted yellow gold rings. Together with five kanji characters engraved in lacquer of the case, they are a tribute to the "Go Rin No Sho". The samurai sword , which Musashi could wield better than any other swordsman, is symbolized in the yellow gold clip.

The fine engravings of the samurai kanji with two crossed swords on the 18k gold nib and the mother-of-pearl Montblanc star topping the cap complete the Miyamoto Musashi Limited Edition. We are a private collector and not affiliated with Montblanc in any way. We have successfully been in business for. And take great pride in our customer service. We are available Monday - Friday from 10:00am - 6:00pm MST.

The item "Montblanc Miyamoto Musashi Limited Edition of 77 Diamond Decorated Fountain Pen" is in sale since Saturday, March 7, 2015. This item is in the category "Collectibles\Pens & Writing Instruments\Pens\Fountain Pens\Montblanc".