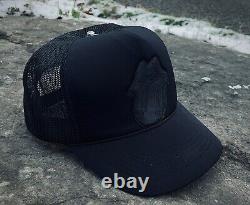 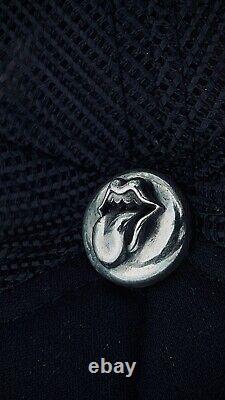 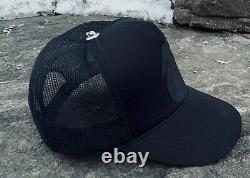 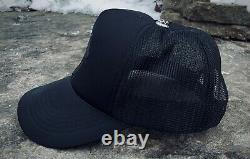 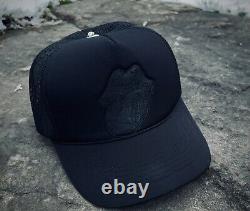 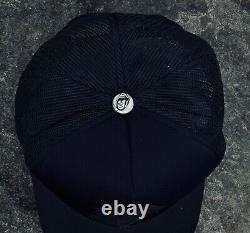 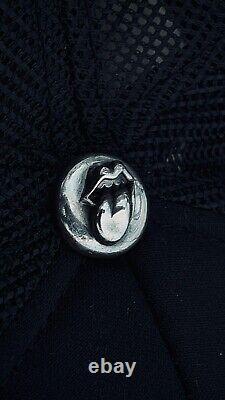 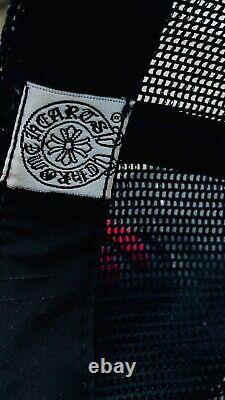 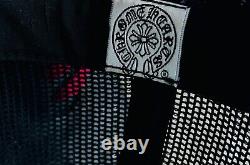 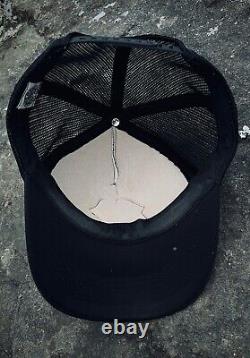 Limited Edition Chrome Hearts Black Leather and Sterling Silver Rolling Stones Trucker Hat. NOTE: Before I discuss this beautiful Chrome Hearts collector's piece - there are a few things I wanted to address. I started collecting Chrome Hearts in the EARLY, early days of the brand. I lived for many years in Malibu, California - and was first exposed to Chrome Hearts in the early'80s. I was a regular, routine customer - so much so, that at one point I was propositioned by that of Richard Stark (one of the Chrome Hearts founders) to make an investment in the fledgling brand.

An offer I declined (and now SORELY regret). Anyways, throughout the years I amassed quite the collection of Chrome Hearts merchandise (most of it being collected in the early to mid'90s, the rest in the early 2000s). In my old age, I can't quite "rock" Chrome Hearts the way I used to.

And - truth be told - much of my collection goes unused, unseen, un-enjoyed. I've begun the process now of parsing out that collection. I encourage you to look over that feedback - if you have any concerns as to authenticity. I picked up this piece in the early 2000s while at the Chrome Hearts store on Madison Avenue in NYC. Before going into the store, I had PROMISED my wife I wouldn't be walking out with anything.

However - a LONG time Rolling Stones fan, and a LONG time Chrome Hearts fan - I simply couldn't resist. They had two variations of this trucker hat at the time, an all black - with a black tongue patch - and a black, with a red tongue patch. I chose the black on black. As, hey - black goes with everything. We then moved (across country) and this was one of those pieces that ended up in storage.

Only recently did I uncover this gem! I thought about bringing it out back into the light, giving it another wear - but I have to say, these days I opt for hats that cover more nearly totally bald head. Thus - here we are.

My hope is that this piece goes out to someone younger than I. Someone who can give it the time in the light, and the continued admiration it so deserves. This hat is "trucker" in style. The back portion of the hat that goes over the skull is midnight black in hue. Traditional "trucker hat" in style, the cap is netted at the back.

I've always loved hats with a netted backing - both aesthetically, but also because netted hats just allow for SO much more airflow. If I had hair, man - I would always opt for netted vs. The dark black color of the netting has maintained perfectly over time.

This hat is snapback - allowing for variable sizing - and the snap is in perfect condition. Moving on to the star of the show - the front of the hat. The front of the hat (both the bill, and the main front) is composed of a thick, padded, plush dark black cotton foam. Agin, the deep black color has maintained brilliantly over time. The bill on this hat actually has some lovely, intricate stitching work going on - giving this hat an added sense of depth and character. Of course, the most stunning element of this hat comes at the front and center with a LARGE, beautifully detailed - finitely etched deep black leather stones tongue patch!

The patch here is un-scuffed, without blemishes or stains of any kind. There is a black leather cord that runs across the bill - where the front meets the bill (love this little added nuance). At the top of the hat - a LARGE, heavy, bulky, chunky, solid 925 Chrome Hearts sterling silver button. This - is what makes the hat a one of one. As you'll notice that this solid silver heavy hardware bears a HIGH detail 3-Dimensional raised sterling Rolling Stones tongue.

The silver is without tarnish, dulling, or flaws of any kind. The inside of the hat is also in beautiful condition. The ONLY sign of wear is some very minor dulling in color at the inside of the hat that meets the forehead. Of course, you'll notice the authentic, Chrome Hearts patch at the inside of the cap. Overall, this is CERTAINLY a piece you will not find elsewhere. You simply will not find this hat listed elsewhere - TRULY - I highly encourage you to comb the web, do some real searching - ultimately, you will end up right back here - as this is the ONLY such model currently listed online. I will get back to you promptly. This item is in the category "Clothing, Shoes & Accessories\Men\Men's Accessories\Hats".

The seller is "uniqueluxurygoods" and is located in this country: US. This item can be shipped worldwide.